Turn your offer into cash and get the home you love. CashUp™ by Evergreen – Learn More

“I went in [to the process] completely blind so everything was a learning experience.”

Eric was shopping around the market and realized that mortgages in the area would be fairly comparable to the places he could rent. This initiated his decision to purchase a house with the help of Evergreen Loan Officer Corey Hjalseth. “The prices for rent in Tacoma are astronomical, and I had the money saved up,” Eric says of buying his first home.

“I went in [to the process] completely blind so everything was a learning experience,” said Eric. He said he didn’t have any idea of what to expect when applying for a home loan and beginning the buying process.

Eric was a little overwhelmed when first walking into his house knowing it was his own. Eric said he had a lot to move, and with a busy schedule he said it was hectic. “It wasn’t the romanticized ‘oh this is my house’ it was more like, ‘I have all this stuff to move, and I have to go to work tomorrow and I’m tired.’”

Eric is excited to make changes to his house that will benefit him for years to come. He explained the projects he has planned are meaningful because he’ll get good use out of the changes he makes to his house, rather than if he were to rent and eventually move out of an apartment.

Eric purchased his house because he could envision his belongings fitting in well. His favorite parts of his house are the updated kitchen, the backyard that gets the evening light, and the cove ceiling in the living room.

“Jack made it possible. I wouldn’t have any type of experience like this if it weren’t for him.” 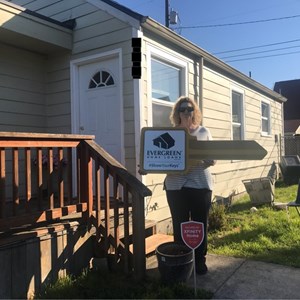